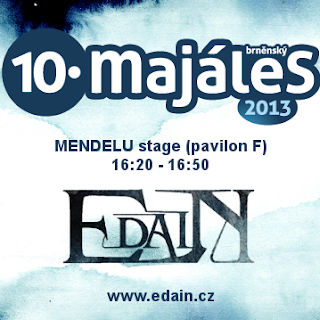 EDAIN will perform at 10. brněnský Majáles, a huge festival organised by Brno universities, with 8 stages and almost 100 artists of different musical genres. Being the only extreme metal band on the list, they will take Mendelu stage on Tuesday, May 7, at 16:20. The show will include the official release of their new album "Of Those Who Worship Fire".
The release event on facebook: http://www.facebook.com/events/153821774792641/
Posted by Unknown at 12:21 PM